High peaks and twisted, snaking forms of eighteen roller coasters rise out of the peninsula, greeting visitors in advance traveling along the Lake Erie Shoreway. Excitement builds as we approach the entrance, walking across the vast ocean of blacktop surrounded by cars having arrived from dozens of states both near and far. The gentle lapping of the waves against the rocks is all but swallowed up by the wooshing of the nearby coasters and the shrieks of their delighted passengers. Stepping through the gates and into the Midway, bright colors, excited chatter, and the ever-present cry of seagulls abound. Welcome to Cedar Point. 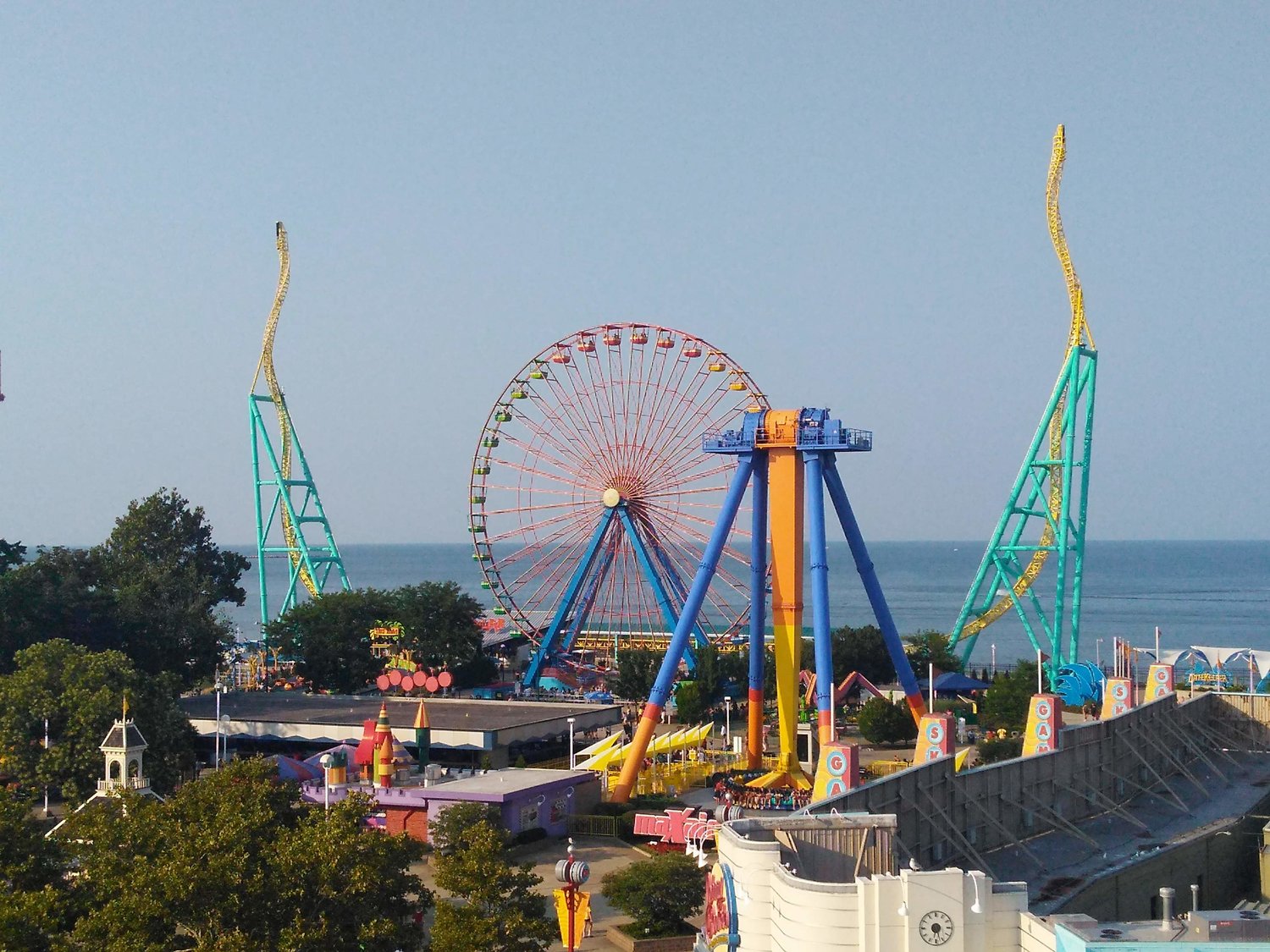 “The Queen of American Watering Places,” Cedar Point has been captivating pleasure-seekers for generations. In the 1860s the arrival of a rail line brought picnickers and bathers looking to enjoy the sandy peninsula now known as Cedar Point. Located in Sandusky, Ohio, the park’s debut as a tourist attraction officially began in 1870 with the construction of a bathhouse, beer garden, and other public amenities, making Cedar Point the second-oldest continuously operating amusement park in America. Nineteenth-century additions included a dance hall, hotel, pony track, and the park’s inaugural roller coaster, the Switchback Railway. Opened in 1892, the Switchback Railway towered an impressive twenty-five feet/7.62 meters high and took riders on the gravity-powered journey of their lives, reaching astonishing speeds of 10 miles-/16 kilometers-per-hour.

While the Switchback was retired over a century ago in 1907, there are many pieces of Cedar Point’s storied history still to be found located throughout the park, if you know where to look. Those entering through the main gate won’t have to look far.

Located at the front of the park right inside the main gate, the Midway Carousel is Cedar Point’s oldest operating ride. Built in 1912, the Midway arrived at the park in 1946 and is one of the few extant works of carousel master-carver Daniel Carl Muller (active 1890-1928). Added to the National Register of Historic Places in 1982, visitors can enjoy a spin on one of the Midway Carousel’s beautifully detailed sixty horses or four chariots. 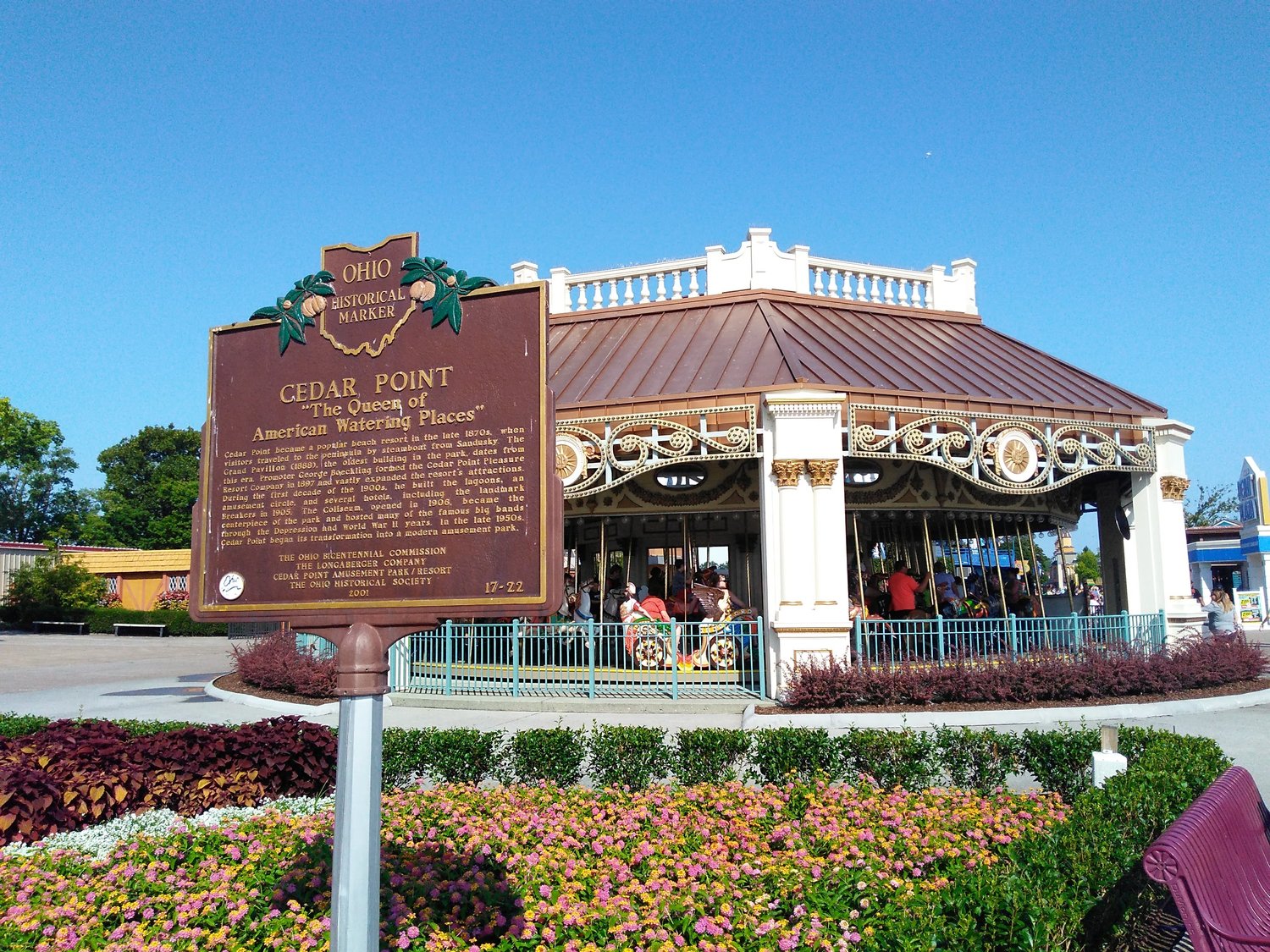 The park’s other two carousels, Kiddy Kingdom’s with fifty-two animals and the Midway’s Cedar Downs Racing Derby with sixty-four horses, respectively, were both added to the National Register of Historic Places in 1990. The latter is one of only two racing carousels left in the United States, whose horses fly along the track at almost 15 miles/24 kilometers-per-hour.

In addition to the carousels, the Main Midway is prime viewing ground for Cedar Point history, both the old guard and more recent inductees. Impossible to miss is the impressive Coliseum, built in 1906. The second floor holds the Cedar Point Grand Ballroom from the days when dances were part of the park-goer's experience, while today’s visitors encounter a first-floor collection of video games and pinball machines, added in the 1960s. Not too far from the Coliseum is the Pagoda Gift Shop, an East Asian-inspired structure originally built in the early 1900s. While it housed the Cedar Point Post Office in 1950s, it is now home to the park’s largest gift shop. 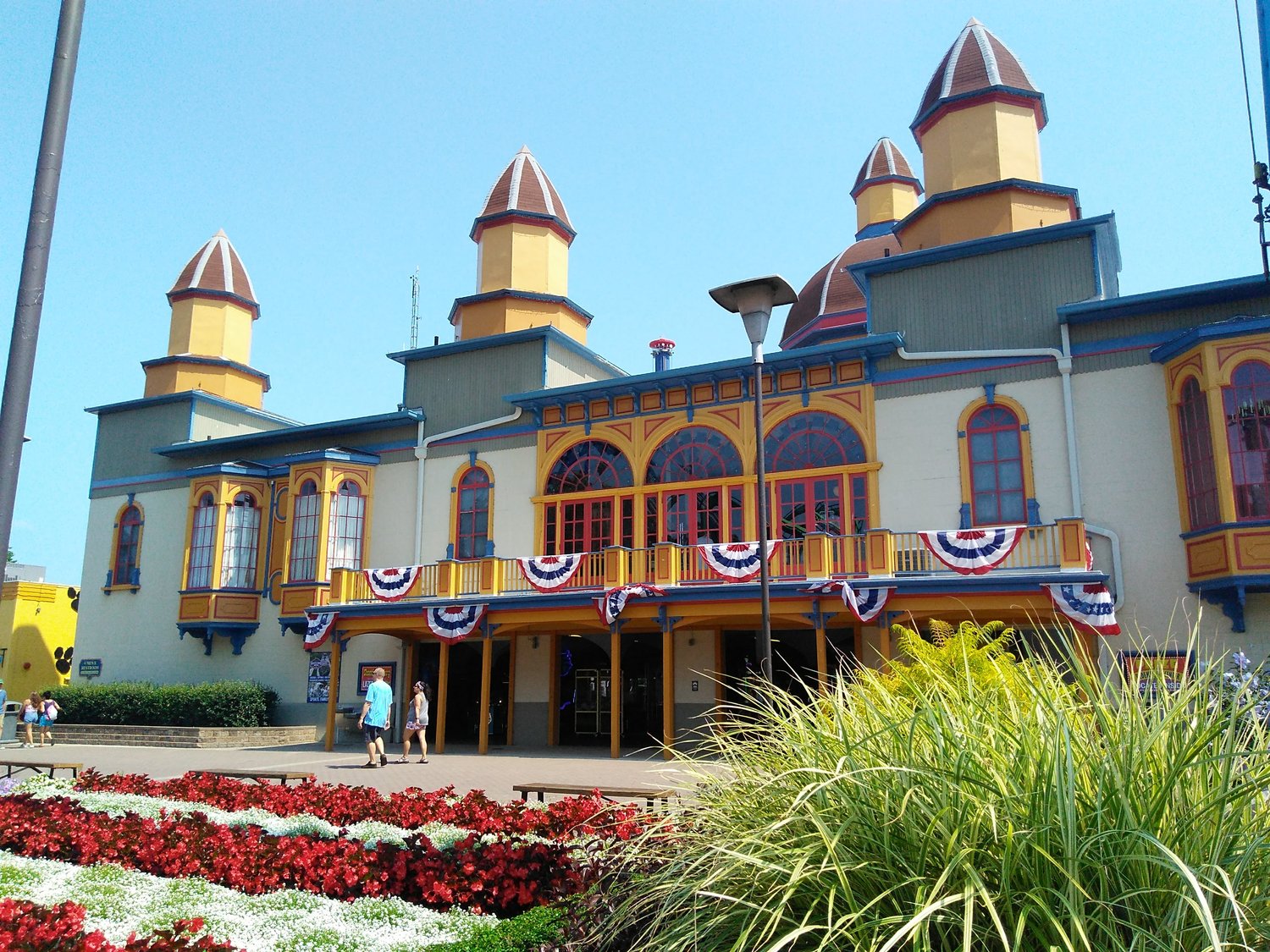 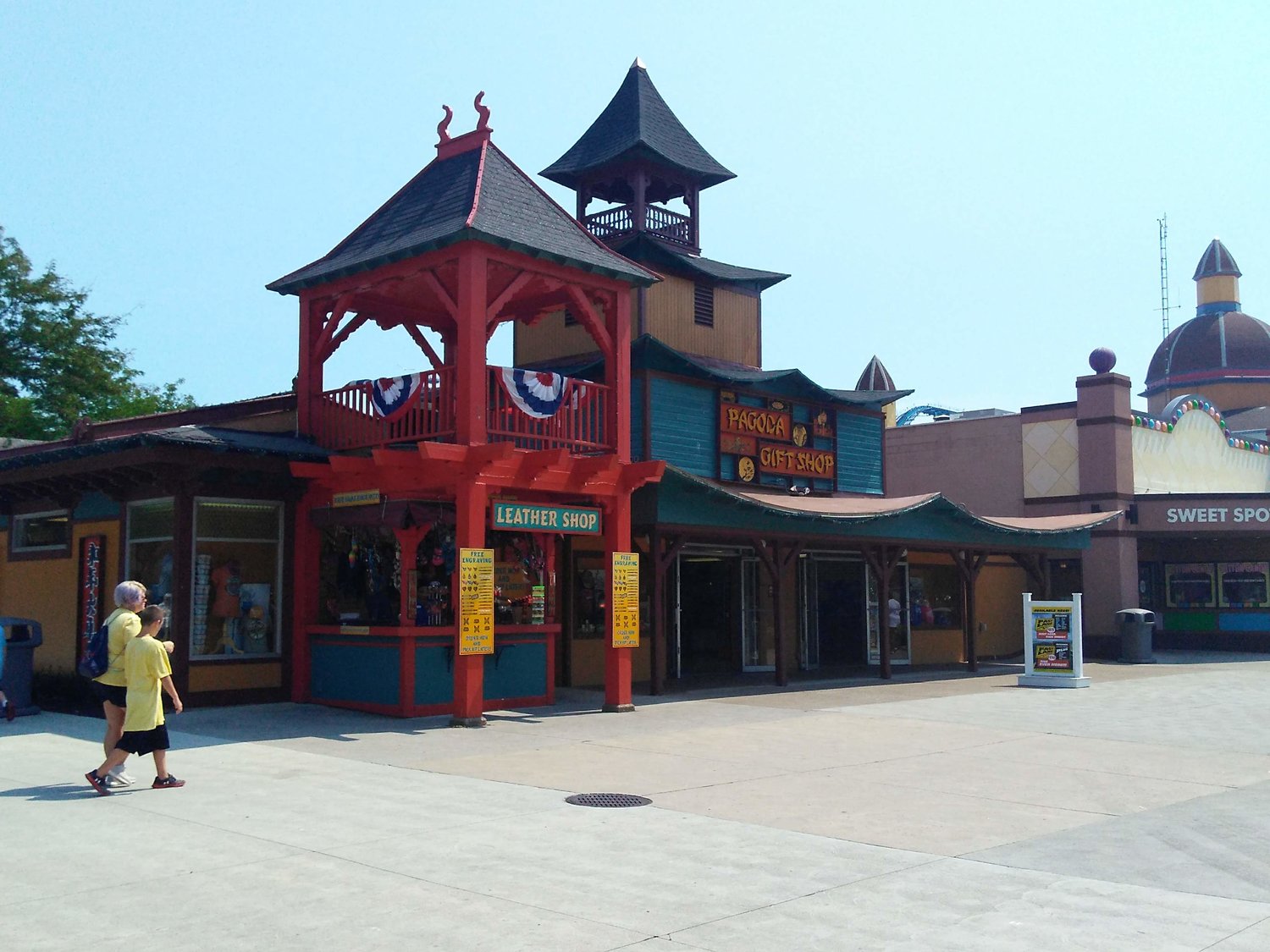 Pre-dating both the Coliseum and the Pagoda but infinitely less recognizable is the Grand Pavilion, tucked slightly off the Main Midway across from Planet Snoopy. Built in 1888, the Grand Pavilion hosted an auditorium, bowling alleys and dining areas, while the adjacent Ladies’ Pavilion offered daintier, family-friendly fare more acceptable for ladies and children. (The Peanuts gang made their debut in 1999, with the addition of family playland Camp Snoopy. Planet Snoopy arrived in 2008.) Originally the Grand Pavilion’s exterior consisted of breezy porches and balconies, now replaced with the symmetrical columns, pediments, and shutters of a pseudo-Federal façade. Only a triangular peak, poking up from behind the stately exterior, hints at the nineteenth-century structure beneath the modern trappings. 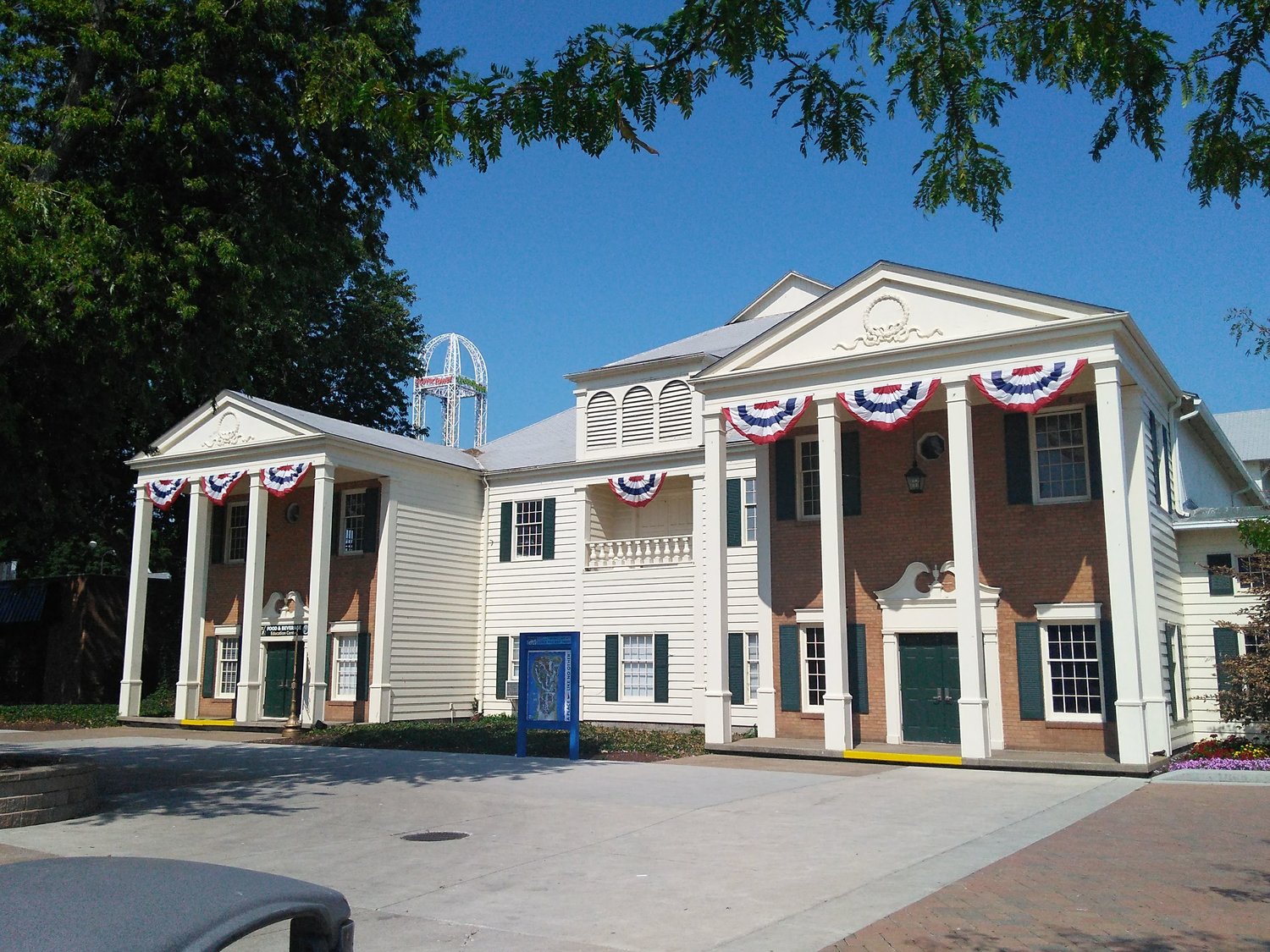 On the other side of the Main Midway and also tucked away, behind the looping green inverted coaster that is 1994’s Raptor, is Cedar Point’s classic wooden coaster, Blue Streak. Opened in 1964, Blue Streak is the park’s oldest operating roller coaster, a mellow ride perfect for first-timers, those looking to get their feet wet, or anyone looking to revisit an old favorite.

Of course, when one has decades of history and countless return visitors, “old favorites” are just as varied as the people who love them. While the years have seen the introduction and retirement of many rides, some are still winning a new crop of followers with each coming year. In 1976, the red, white, and blue spirals of Corkscrew opened, followed in 1978 by Gemini’s red-and-blue duel track racing coaster; both continue welcoming riders each season. A great favorite with youngsters and those who might not otherwise like rollercoasters, Iron Dragon began taking riders for a sweeping excursion over a dark blue lagoon in 1987, complete with water spouts. My personal favorite, the cherry-red Magnum XL-200, opened to great fanfare in 1989, being the first roller coaster in the world to clear 200 feet/60.96 meters. 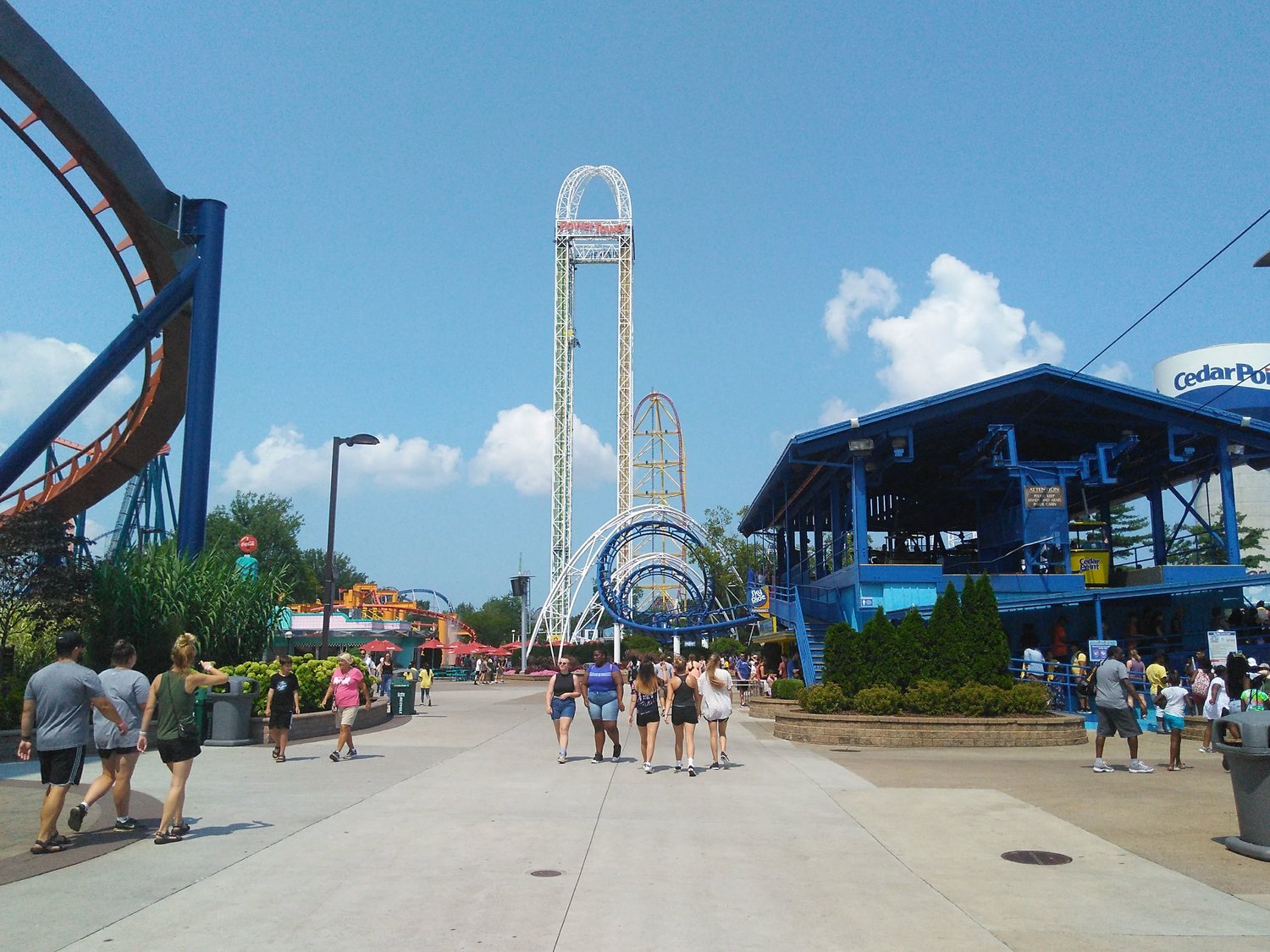 Many new arrivals of the 1990s still stand, including Snake River Falls (‘93), Raptor (‘94), and Power Tower (‘98). The 2000s ushered in a new era of coasters, starting with Millennium Force, then the tallest (310 feet/94 meters) and fastest (93 miles/149 kilometers-per-hour) “giga-coaster” on Earth. Lemon-yellow Wicked Twister (‘02), awe-inspiring Top Thrill Dragster (‘03, at 420 feet/128 meters and reaching speeds of 120 miles/193 kilometers-per-hour, Dragster took the crown for tallest and fastest coaster in the world), and 2007’s Maverick, whose addition brought Cedar Point’s total coaster count to seventeen, more than any other park on the planet. Not content to end there, these past few years brought GateKeeper (‘13), Rougarou (‘15 - the park’s first floorless coaster), and 2018’s Steel Vengeance, the tallest, fastest, steepest hybrid roller coaster on Earth.

The first of its kind, Steel Vengeance is a hyper-hybrid, steel-on-wood roller coaster standing 205 feet/62.48 meters tall. To frequent Cedar Point visitors, the wooden structure supporting the track of Steel Vengeance should be recognizable as the remainders of the notorious Mean Streak, known for taking riders on a jolting, jerking ride and leaving them with a mean, if not downright nasty, headache. When it opened in 1991, Mean Streak held the world title of tallest (161 feet/49 meters) and fastest (65 miles/105 kilometers =-per-hour) wooden roller coaster, and was perhaps the leading cause of Sandusky’s Dramamine sales for the next quarter-century. Steel Vengeance improves upon its predecessor, dropping riders 200 feet (60.96 meters) at a 90-degree angle and reaching speeds of 74 miles/119 kilometers-per-hour. The overall experience is infinitely sleeker, a welcome respite for those faithful ride warriors who gamely climbed aboard Mean Streak every visit, and a testament to the innovation of the roller coaster industry.

While innovation and technological advancement literally built upon the likes of Mean Streak, other rides such as Disaster Transport (1990) were completely cleared away to make room for new arrivals. (In the case of Disaster Transport, it was removed in 2012 for 2013’s GateKeeper.) Past coasters and other attractions can still be found in Frontier Town’s Town Hall Museum, albeit in modular form. The museum is also home to a plethora of park history and memorabilia, including photographs, maps, souvenirs, and famous visitors, as well as a fire engine, antique model train display, and Frank Steinle’s Automatic Wonder Clock, a “mechanical wonder” built by German immigrant and Sandusky resident Frank Steinle. After building the clock over a span of twenty-five years, he was able to put it on display in 1897. It was acquired by Cedar Point in 1973, after its discovery in the family’s garage. 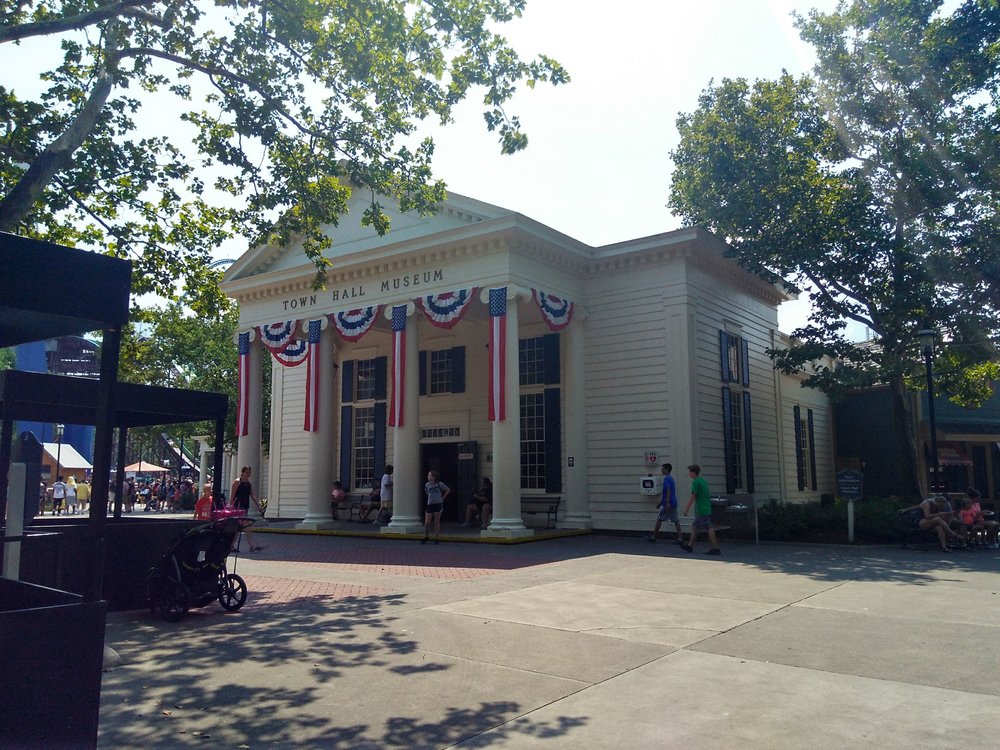 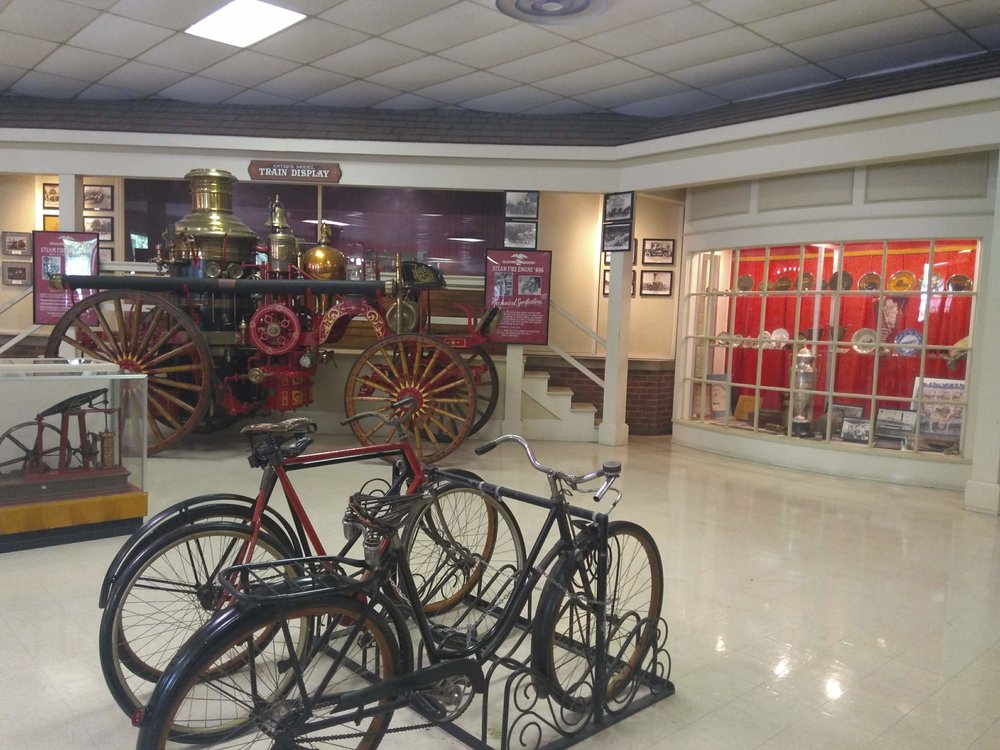 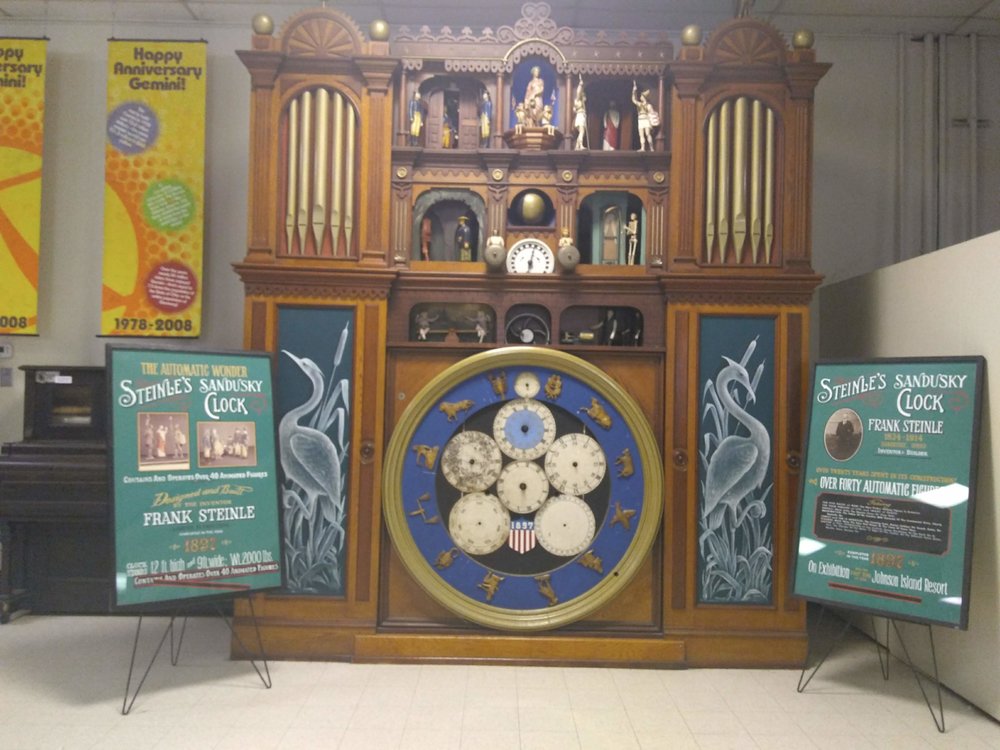 Throughout the decades Cedar Point has made a habit of collecting and displaying pieces of local history, and not only in the museum. Perhaps this is best illustrated in the surprisingly verdant Frontier Trail, a wooded area connecting Frontier Town and Millennium Midway. Under the welcome shade of the many trees are an assortment of log cabins dating to the mid-1800s, moved to the site from nearby townships beginning in 1971. The log cabins house craft demonstrations, a glassblowing workshop, candlemaker, and candy shop, among other things. A gristmill, a reconstruction of Fort Sandusky, and the Petting Farm round out the bucolic charm. 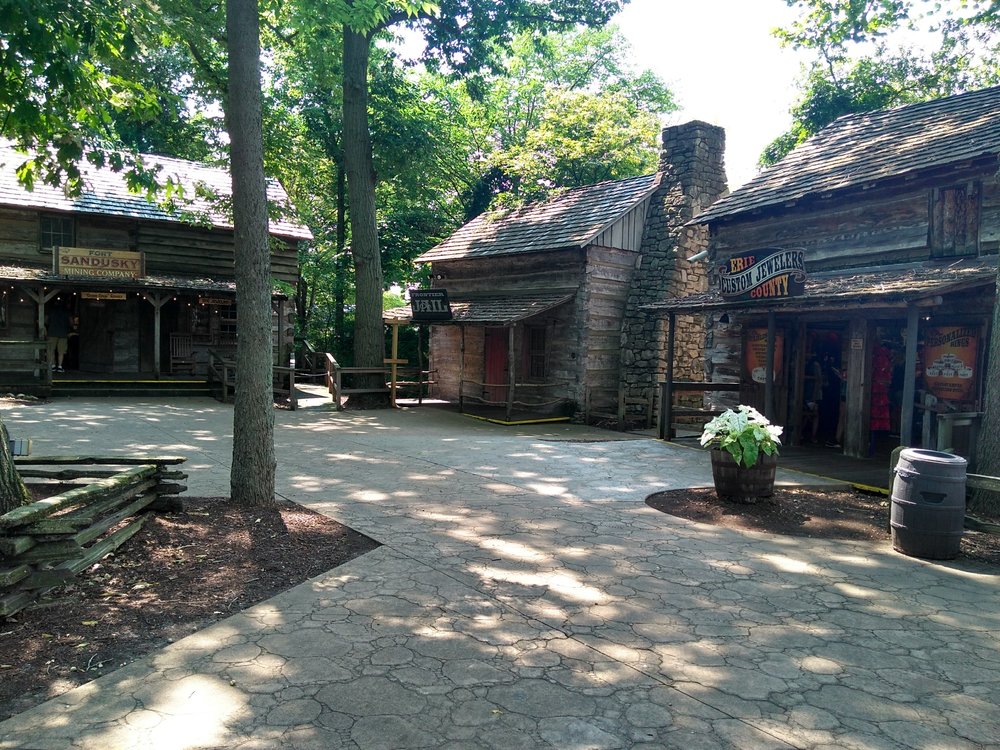 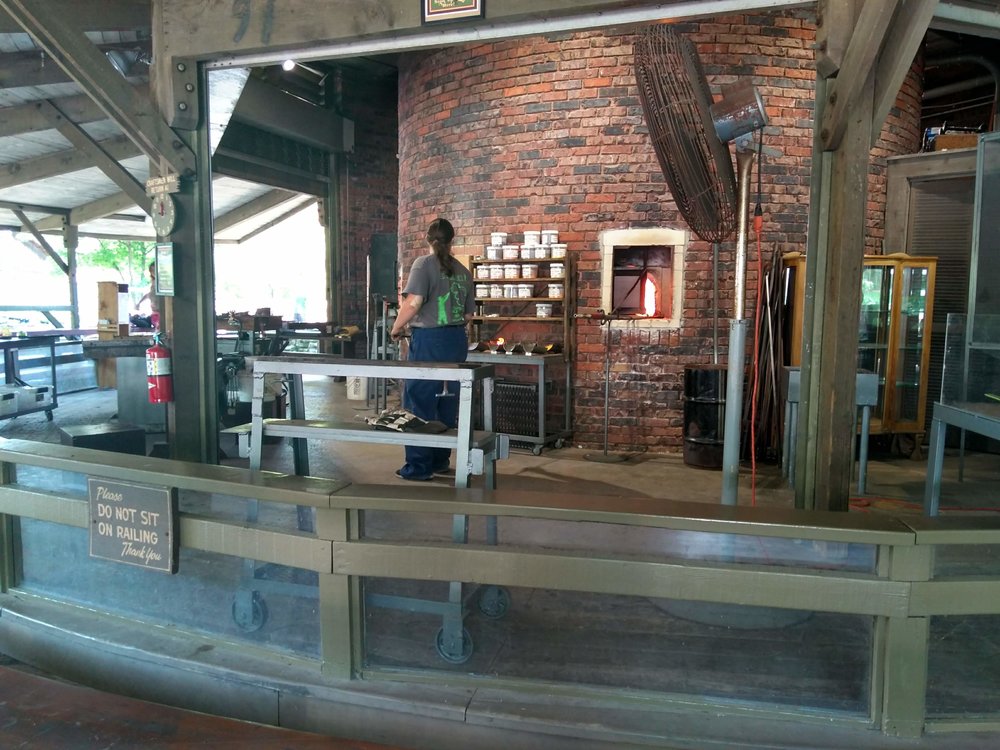 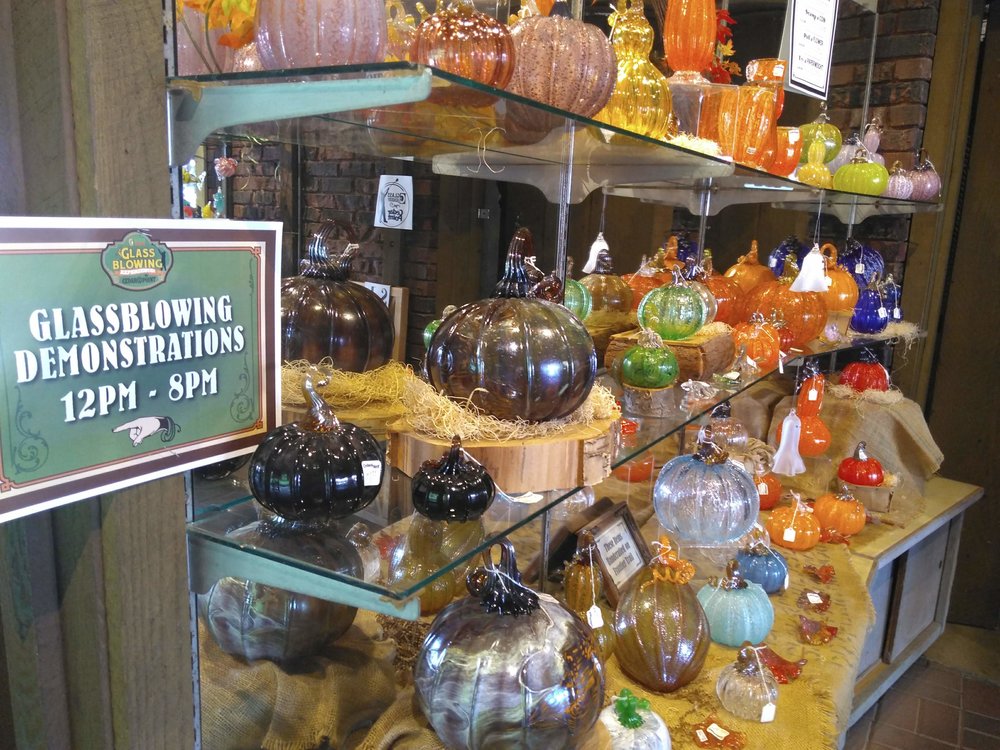 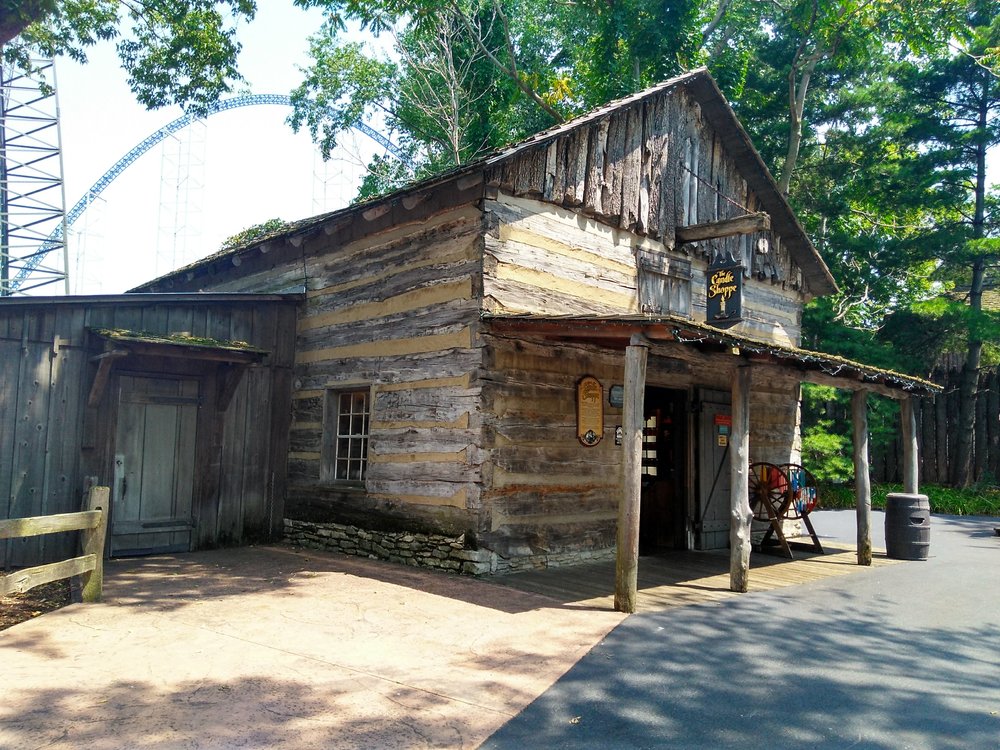 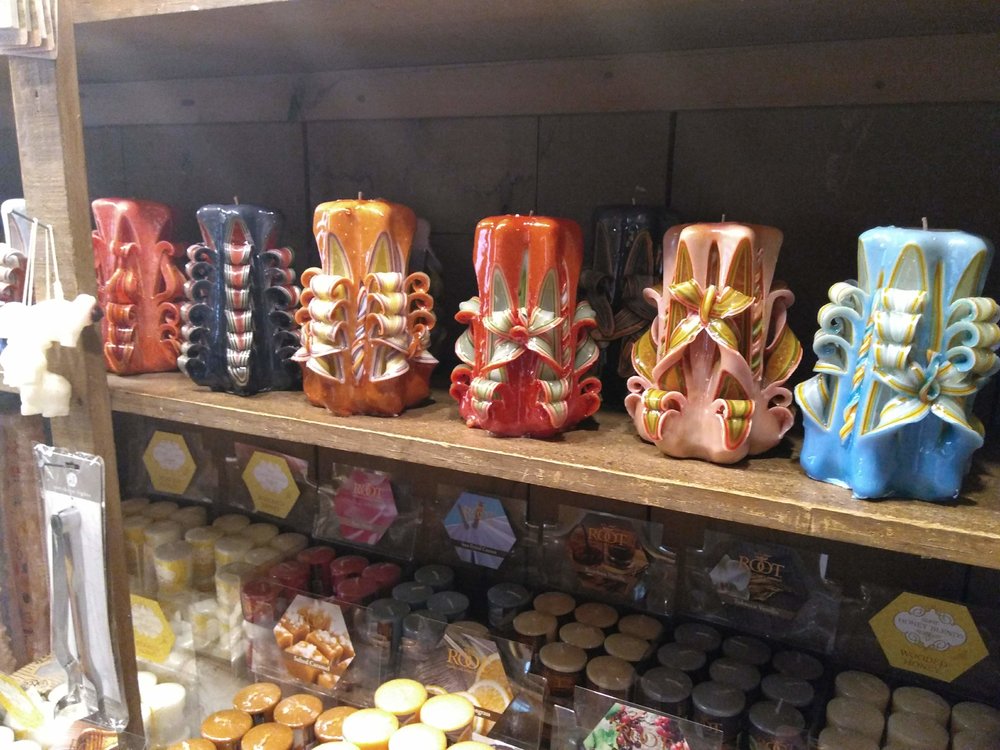 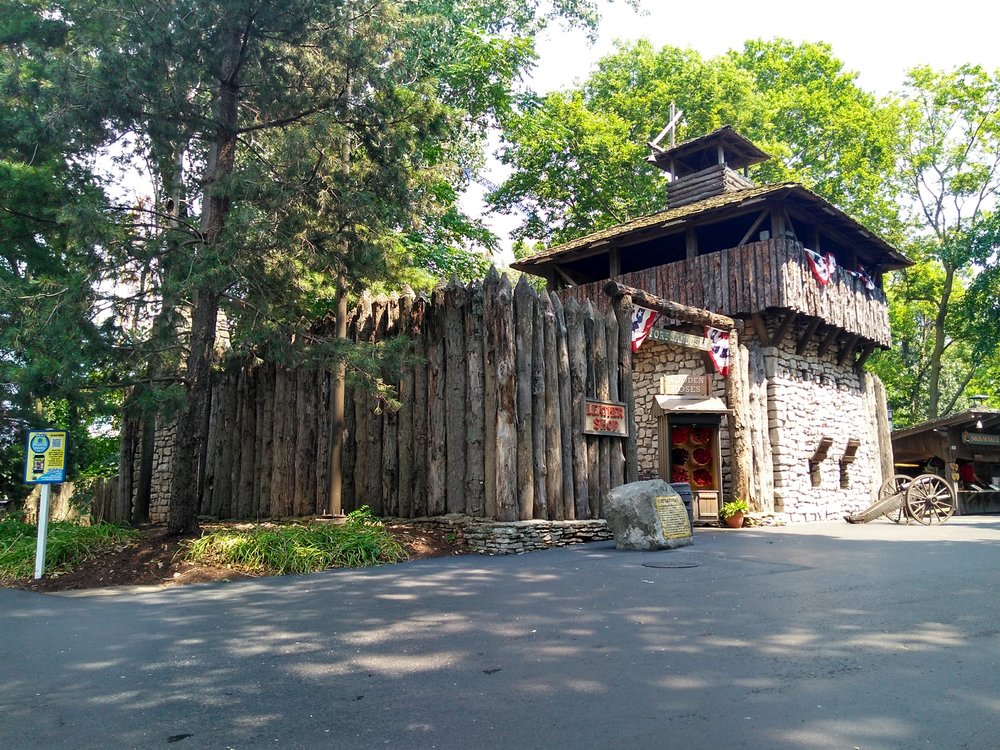 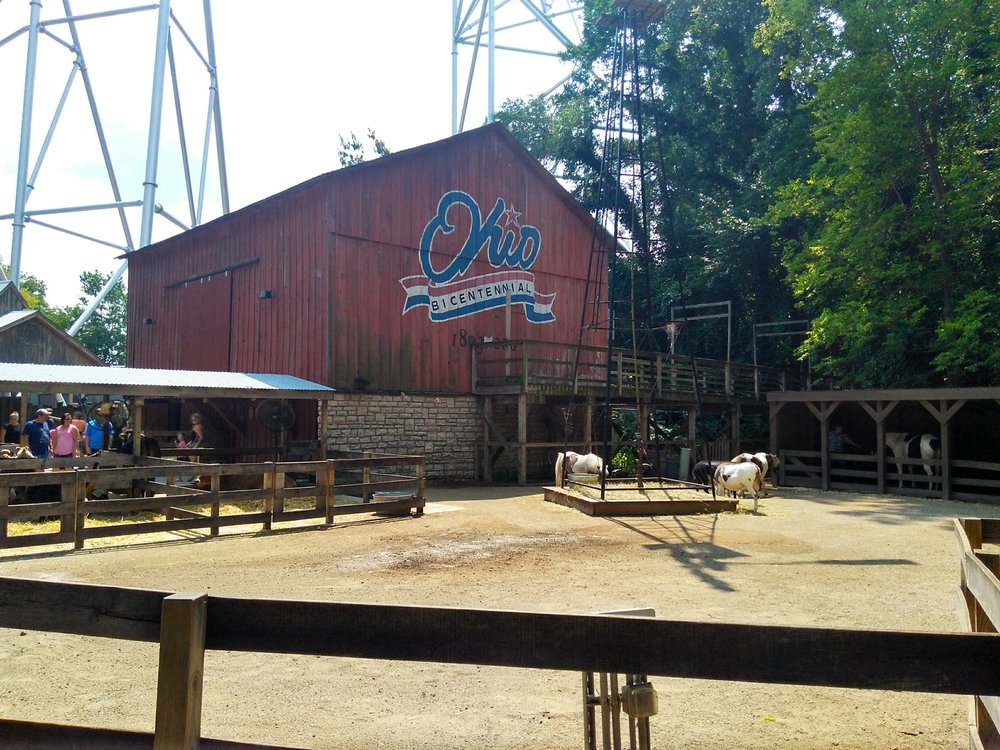 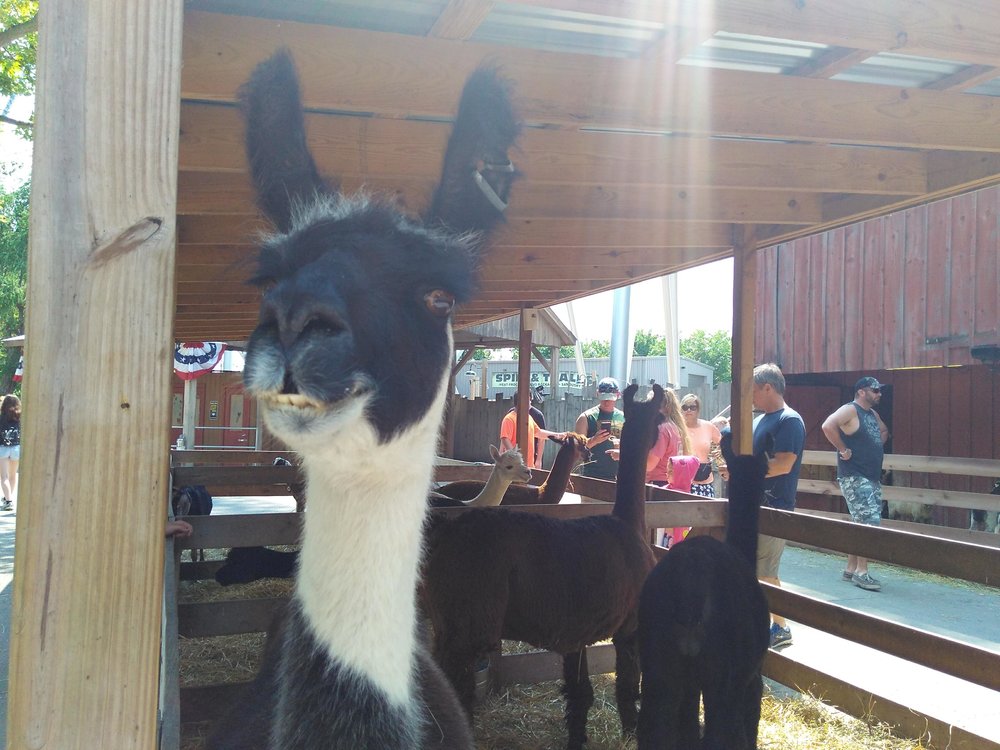 Architectural charm is found all throughout the park, and in some of the most unexpected places: A Victorian-style Lost Persons & Message Center in Planet Snoopy; an Italianate Subway sandwich shop on the Main Midway; and a nod to patriotic neo-Federalism, complete with clock tower and balcony festooned with red, white and blue bunting, whose doorway leads to a public restroom in Frontier Town. Visual treats such as these make a visit to Cedar Point that much more enjoyable, doubly so because many of them arrived organically, added to the park over a hundred-plus years of history. These buildings, gardens, and water features are the yin to the coasters’ yang, grounding the park in the natural landscape as the metal coasters spiral overhead. 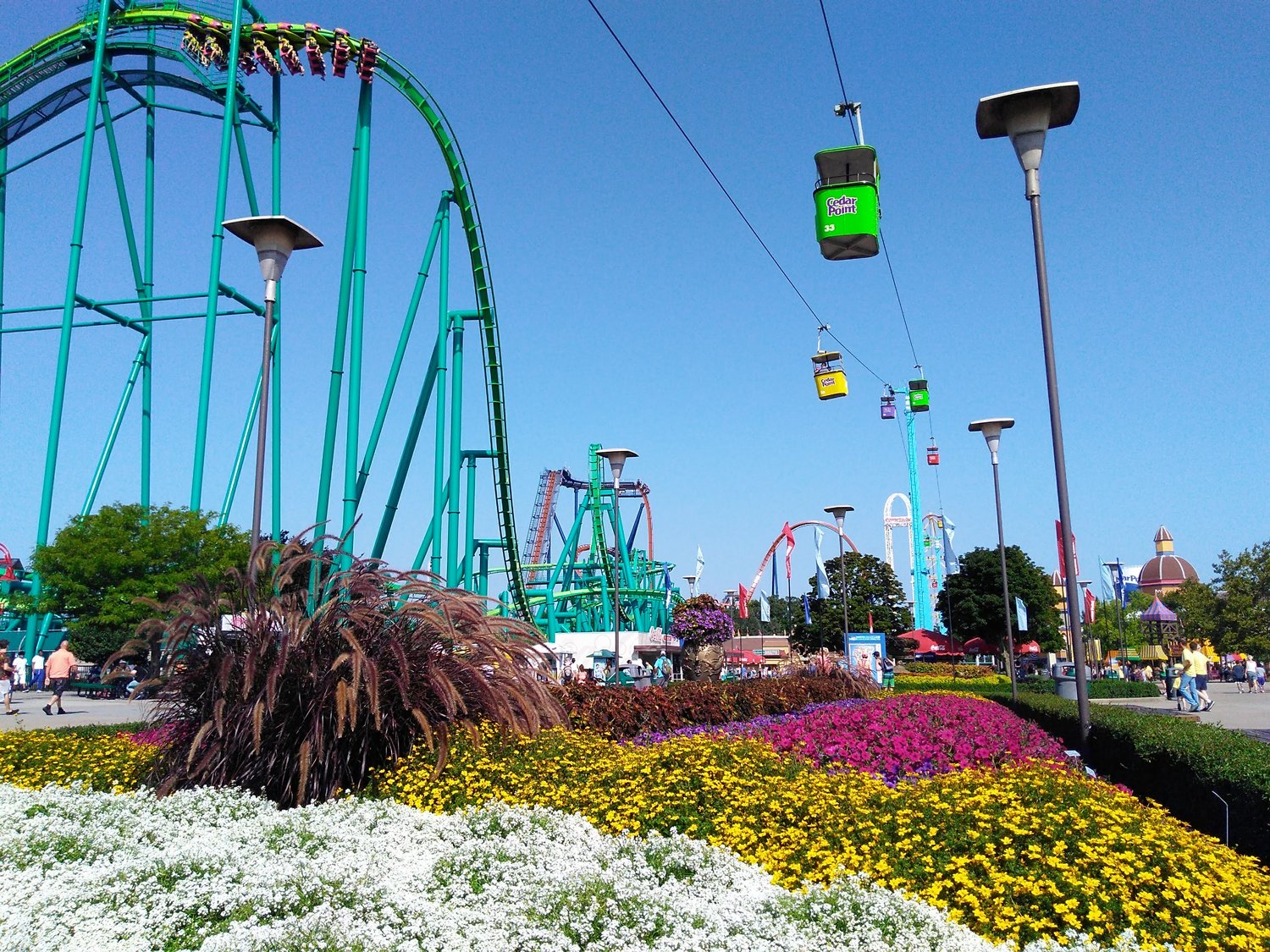 It is fitting, then, that Cedar Point’s oldest building was once used to ground travelers, guiding them as they sailed the perilous waters of Lake Erie: Cedar Point Lighthouse, located on the northwest corner of the peninsula. First built in 1839, the lighthouse underwent multiple iterations before being abandoned in 1975. It achieved entry to the National Register of Historic Places in 1984, under the listing “U.S. Coast Guard Building.” The surrounding property and building were acquired by Cedar Point in 1987. In keeping with the tradition of rehabilitating old structures instead of tearing them down, the lighthouse was restored as the centerpiece of Lighthouse Point, a campground featuring cottages, cabins, and RV stations made to resemble a waterfront New England village. It opened in 2001.

I would venture to say many, if not most, people enjoying a stay at Lighthouse Point fail to realize the historic importance of the lighthouse, though they appreciate its presence and the gravitas it lends their experience. Such is the beauty of Cedar Point, a treasure trove of history. For while the technological marvels on which we soar above the rooftops come and go, the storied old guard remains on the ground, to welcome us back again next year. 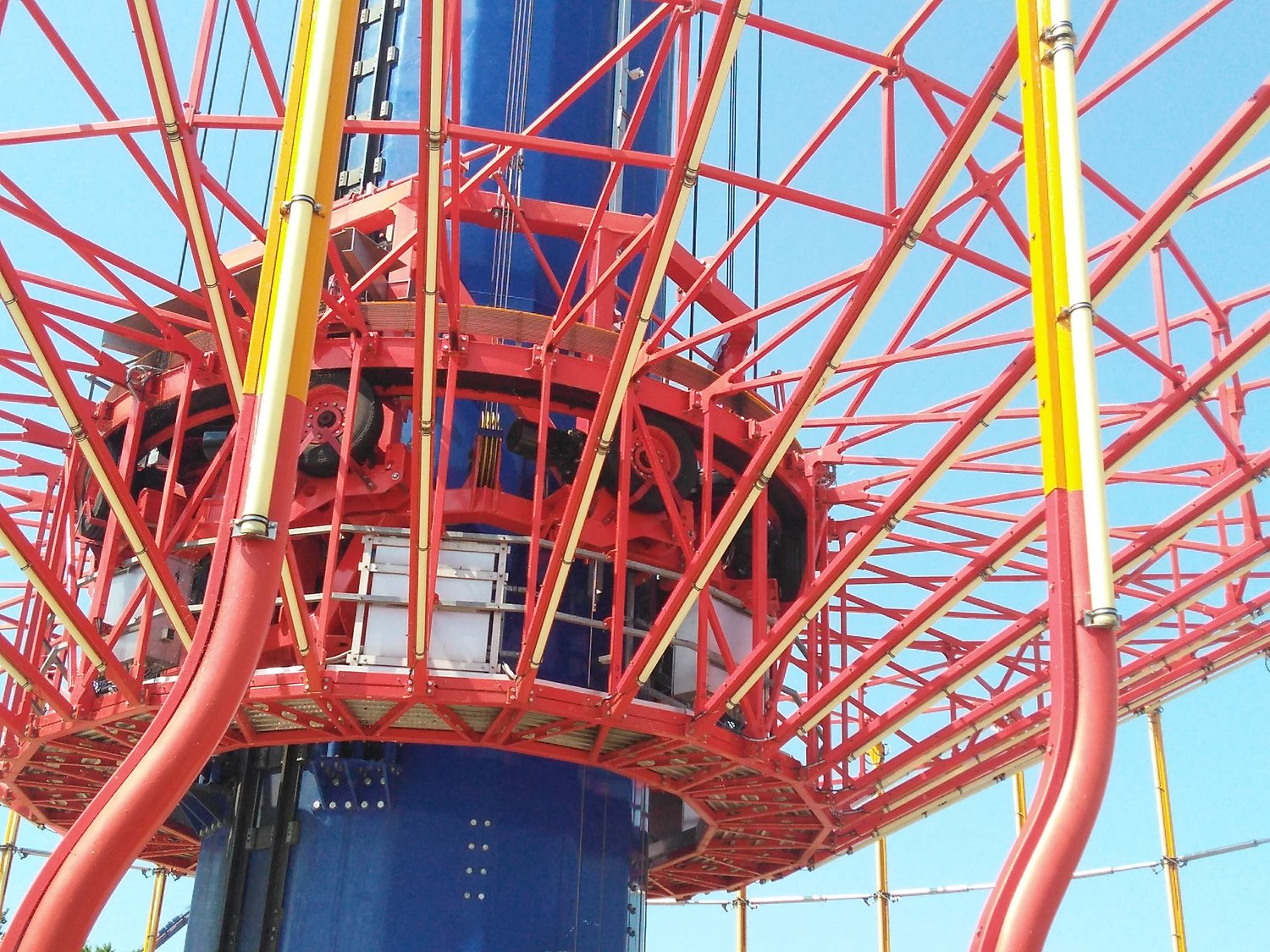